Web want to know you inside out

A new analysis of online consumer data shows that large Web companies are learning more about people than ever from what they search for and do on the Internet, gathering clues about the tastes and preferences of a typical user several hundred times a month. 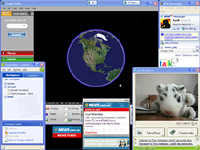 Web want to know you inside out

These companies use that information to predict what content and advertisements people most likely want to see. They can charge steep prices for carefully tailored ads because of their high response rates.

The analysis, conducted for The New York Times by the research firm comScore , provides what advertising executives say is the first broad estimate of the amount of consumer data that is transmitted to Internet companies.

comScore is an internet marketing research company that provides marketing data and services to many of the Internet's largest businesses. comScore tracks all internet data on its surveyed computers in order to study online behavior.

Privacy advocates have previously sounded alarms about the practices of Internet companies and provided vague estimates about the volume of data they collect, but they did not give comprehensive figures.

Consumers have not complained to any great extent about data collection online. But privacy experts say that is because the collection is invisible to them. Unlike Facebook’s Beacon program, which stirred controversy last year when it broadcast its members’ purchases to their online friends, most companies do not flash a notice on the screen when they collect data about visitors to their sites.

But executives from the largest Web companies say that privacy fears are misplaced, and that they have policies in place to protect consumers’ names and other personal information from advertisers. Moreover, they say, the data is a boon to consumers, because it makes the ads they see more relevant. These companies often connect consumer data to unique codes identifying their computers, rather than their names.

The rich troves of data at the fingertips of the biggest Internet companies are also creating a new kind of digital divide within the industry. Traditional media companies, which collect far less data about visitors to their sites, are increasingly at a disadvantage when they compete for ad dollars.

The major television networks and magazine and newspaper companies “aren’t even in the same league,” said Linda Abraham, an executive vice president at comScore.

During the Internet’s short life, most people have used a yardstick from traditional media to measure success: audience size. Like magazines and newspapers, Web sites are most often ranked based on how many people visit them and how long they are there.

But on the Internet, advertisers are increasingly choosing where to place their ads based on how much sites know about Web surfers. ComScore’s analysis is a novel attempt to estimate how many times major Web companies can collect data about their users in a given month.

Large Web companies like Microsoft and Yahoo have also acquired a number of companies in the last year that have rich consumer data.

“So many of the deals are really about data,” said David Verklin, chief executive of Carat Americas, an ad agency in the Aegis Group that decides where to place ads for clients.

Web companies also can collect more data as people spend more time online. The number of searches that American Web users enter each month has nearly doubled since summer of 2006, to 14.6 billion searches in January, according to comScore.

The information transmitted might include the person’s ZIP code, a search for anything from vacation information to celebrity gossip, or a purchase of prescription drugs or other intimate items. Some types of data, like search queries, tends to be more valuable than others.

Yahoo came out with the most data collection points in a month on its own sites — about 110 billion collections, or 811 for the average user. In addition, Yahoo has about 1,700 other opportunities to collect data about the average person on partner sites like eBay, where Yahoo sells the ads.

eBay Inc. is an American Internet company that manages eBay.com, an online auction and shopping website in which people and businesses buy and sell goods and services worldwide. In addition to its original U.S. website, eBay has established localized websites in thirty other countries. eBay Inc also owns PayPal, Skype, and other businesses.

MySpace, which is owned by the News Corporation, and AOL, a unit of Time Warner, were not far behind.

ComScore said it recorded the ad networks using different methods and that the exact ordering of these top companies might vary with a different methodology, but the overall picture would be similar.