Airborne to deal with false-advertising complaints

Airborne’s maker has “caught a cold” itself, now it has to deal with false-advertising complaints. 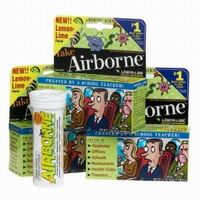 Airborne to deal with false-advertising complaints

A dietary supplement and health formula claims to help ward off harmful bacteria and germs, and help prevent the flu and the common cold. But it doesn’t seem so harmless.

It turned out that customers spent more than $23.3 million on Airborne products (such as Airborne On-the-Go, Airborne Nighttime, Airborne Gummi and Airborne Power Pixies), according to a special Web for customers’ claims.

The manufacturers agreed to reimburse customers for up to six purchases of Airborne products, but they didn’t seem to admit illegal conduct.

Actually the turmoil was sparked by an ABC News report last year. The discovery was that GNG Pharmaceutical Services has no official clinic, scientists, or even doctors. In fact the company comprises only two men, who started the company just to perform this study. Because of the bad publicity that this controversy has brought forth, Knight-McDowell Labs has removed all references to the study from their packaging and web site.

So there is no credible evidence that Airborne can actually prevent colds or protect you from a germy environment.

Airborne has managed to get its own niche thanks to bright commercials, the brand-image, star power and favorable placement on drugstore shelves. Oprah Winfrey, Howard Stern, Kevin Costner and other stars endorsed the product with a harmless cartoon upon its package.