A tremendous discovery was made Thursday in a Las Vegas motel room. The police found a package of protein ricin inside. 7 occupants of the room were sent to hospital under suspicion of possible chemical poisoning. 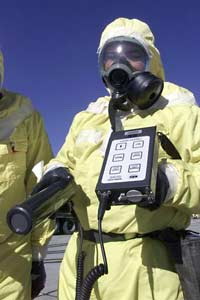 The police claimed that the case wasn’t intended as a terrorist act. But it seems not that simple.

Ricin is poisonous if inhaled, injected, or ingested, acting as a toxin by the inhibition of protein synthesis. Ricin is 6000 times more toxic than cyanide and 12000 times more poisonous than rattlesnake venom by weight. Ricin causes severe diarrhea and victims can die of shock.

Ricin has an average lethal dose in humans of 0.2 milligrams (1/5,000th of a gram), though some sources give higher figures. As little amount as a pinhead can kill an adult.

The best-known documented use of ricin as an agent of biological warfare was by the Soviet Union 's KGB during the Cold War. In 1978, the Bulgarian dissident Georgi Markov was assassinated by Bulgarian secret police who surreptitiously 'shot' him on a London street with a modified umbrella using compressed gas to fire a tiny pellet contaminated with ricin into his leg. He died in a hospital a few days later; the body of Georgi Markov was passed to a special poison branch of the British MOD who discovered the pellet during an autopsy. The prime suspects were the Bulgarian secret police: this was because Georgi Markov had defected from Bulgaria some years previously and had subsequently written books and made radio broadcasts which were highly critical of the Bulgarian communist regime. However, it was believed at the time that Bulgaria would not have been able to produce the poison, and it was also believed that the KGB had supplied it. The KGB denied any involvement although high-profile KGB defectors Oleg Kalugin and Oleg Gordievsky have since confirmed the KGB's involvement. Earlier, Soviet dissident Aleksandr Solzhenitsyn also suffered (but survived) ricin-like symptoms after a 1971 encounter with KGB agents.

Despite ricin's extreme toxicity and utility as an agent of chemical/biological warfare, it is extremely difficult to limit the production of the toxin. Under both the 1972 Biological Weapons Convention and the 1997 Chemical Weapons Convention, ricin is listed as a schedule 1 controlled substance. Despite this, more than 1 million metric tonnes of castor beans are processed each year, and approximately 5% of the total is rendered into a waste containing high concentrations of ricin toxin.

Nowadays the possession of ricin is not illegal, but almost no ordinary civilian would have any legitimate reason to keep it around.

The police still can’t define whether it was a criminal intent on anybody’s part. Or may be someone wanted to commit suicide.