Solvay SA, the world's largest maker of male hormone therapies, dropped the most in more than two years in Brussels trading after U.S. partner Wyeth ended a partnership on psychiatric treatments. 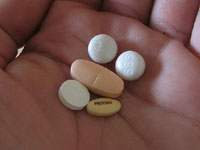 Wyeth, based in Madison, New Jersey, said today it would hand back rights to the bifeprunox experimental antipsychotic therapy and other compounds. Brussels-based Solvay slashed its forecast for drug sales in September after failing to win U.S. approval for bifeprunox. The Food and Drug Administration asked Solvay and Wyeth to do more tests before the agency would consider approving the medicine.

Solvay will "analyze all options'' for the compounds to which Wyeth relinquished its rights, Executive Vice President Claus Steinborn said in an e-mailed statement today.

Solvay is now under pressure to present successful results from late-phase trials on an updated version of its fenofibrate cholesterol medication, which it's developing with Abbott Laboratories, Hanssen said. The results are scheduled to be presented at the American College of Cardiology's conference beginning March 29 in Chicago, he said.

Solvay has changed radically in recent years, into a group focused on competitiveness, leadership and high added value activities, aimed at sustained and profitable growth and led by a passion for innovation.
Solvay, which operates in Pharmaceuticals, Chemicals and Plastics, generated EUR 9.6 billion of sales in 2007 from more than 400 units in over 50 countries. Some 28,300 people apply their talents daily to satisfying the demands of the Group’s 160 000 clients.

Wyeth is known for manufacturing the over-the-counter drugs Robitussin and the analgesic Advil, as well as the prescription drugs Premarin and Effexor, which both boast over $3 billion in sales annually.