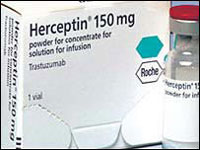 HER2-positive breast cancer affects approximately 20 to 30 percent of women with breast cancer, the most common cancer among women worldwide.

Each year more than 1 million new cases of breast cancer are diagnosed worldwide, and nearly 400,000 people will die of the disease annually.

Herceptin, a humanized antibody, designed to target and block the function of HER2, a protein produced by a specific gene with cancer-causing potential, is marketed by Roche's subsidiary in Japan.

F. Hoffmann–La Roche Ltd. is a Swiss global health-care company which operates world-wide under two divisions: Pharmaceuticals and Diagnostics. It belongs to the Roche Holding AG.

The headquarters are in Basel and the company has many sites around the world - including: Nutley, Palo Alto, Pleasanton, Branchburg, Indianapolis, Florence in the US, Welwyn Garden City in the UK, Mannheim, Penzberg in Germany, and Shanghai in China .