The U.S. Centers for Disease Control and Prevention reported that Americans are getting less and less sleep. 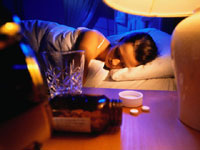 Late-night TV-watching, Internet surfing and other distractions leave little time for sound sleep. All this sleeplessness can be a nightmare for mental and physical health, CDC experts cautioned, calling sleep loss an under-recognized public health problem.

The CDC survey was conducted in New York , Hawaii , Delaware and Rhode Island , asking people how many days in the prior month they got insufficient rest or sleep, without asking specifically how many hours they slept.

But the CDC released nationwide data collected separately showing that across all age groups, the percentage of adults reporting sleeping six hours or less a night increased from 1985 to 2006.

The CDC said 50 to 70 million Americans suffer from chronic sleep loss and sleep disorders in a country of 300 million.

The CDC four-state survey found that younger adults are more likely than older adults to report getting too little sleep. It also found overall that 30 percent of respondents said they got enough sleep every day of the past month, and 33 percent got too little on one to six days in the prior month.