A group of specialists will investigate why a federal agency is withholding a report describing potential health threats near 26 heavily polluted areas in the Great Lakes region. 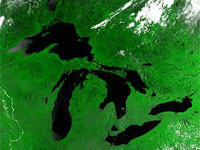 The handling of the matter by the Centers for Disease Control and Prevention "raises grave questions about the integrity of scientific research" at the agency, "as well as the treatment of its scientists," U.S. Reps. John Dingell and Bart Stupak said in a letter Thursday to CDC Director Dr. Julie Louise Gerberding.

CDC spokesman Glen Nowak said the agency would make an announcement soon about its plans for the report. Earlier this month, he said it was being revised to correct flaws.

The Center for Public Integrity, a nonprofit journalism organization in Washington , D.C. , earlier published what it said were excerpts from a version that had been scheduled for release in July.

It said many of the counties where the 26 "areas of concern" are located have abnormally high rates of cancer and other health problems such as infant mortality, low birth weight and premature births. Detroit , Chicago , Cleveland and Milwaukee are among the areas of concern.

Altogether, the areas have more than 100 sites polluted with toxic wastes such as PCBs, mercury and dioxins, the report said. Of those, 71 were identified as having "a potential human health impact".

The report doesn't say the waste sites caused the health problems but raises questions for further study, according to scientists who have reviewed it.

But Dingell and Stupak said that if its conclusions are accurate, "the health of millions of people in the Great Lakes region may be at risk."

The CDC's Agency for Toxic Substances and Disease Registry conducted the study. It was requested in 2001 by the International Joint Commission, an independent panel that advises U.S. and Canadian officials on Great Lakes water quality issues.

The lawmakers asked the CDC for records involving the decision to withhold the report. They requested copies of communications between Christopher De Rosa, the scientist who led the study, and his superiors — Gerberding and Dr. Howard Frumkin, director of the toxics agency.

Dingell and Stupak said they had been told De Rosa was demoted after pushing for release of the Great Lakes report. Nowak said De Rose was reassigned, but that he didn't know whether the move was related to the report. He declined further comment, saying the CDC would not discuss personnel matters.