The federal government has picked three venture capital firms to take promising energy technology ideas from national laboratories and try them in practice in companies. 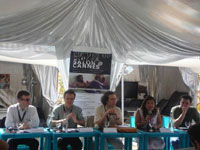 Under the new Entrepreneur in Residence program from the U.S. Department of Energy, each venture firm will work with a specific national lab. The firm will choose an experienced entrepreneur to spend several months at that lab, examining the facility's research into alternative energy or energy efficiency.

The entrepreneur will then take the most promising idea and, with the help of the venture capital firm, turn that idea into a new company.

Assistant Secretary Andy Karsner, who heads the Energy Department's renewable power and efficiency programs, described the effort as a way to make sure good ideas generated at the labs don't languish there. Venture capitalists, he said, do a better job of bringing new technology to the marketplace than the government does. He reported the names of the companies and labs.

The Energy Department will spend about $100,000 per entrepreneur per year to help pay salary and expenses. Each venture firm is expected to contribute at least that much.

The program is designed to run in one-year cycles. Each year, the government will seek bids from all the venture firms that want to participate and then pick three winners.

National labs already have a long record of developing technologies that later end up in the marketplace. But the process could use some improvement, said Tom Williams, head of technology transfer at the National Renewable Energy Laboratory.

"Whatever that accomplishment in the past, our goal is to get 2x, 5x, 10x faster than that," he said Wednesday. He said his researchers are up to the task. "They are crazy excited about the opportunity to see their technologies commercialized."