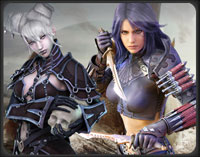 Guild Wars is an episodic series of multiplayer online role-playing games created by ArenaNet, a Seattle game development studio and a subsidiary of the South Korean game publisher NCsoft. Three stand-alone episodes and one expansion pack were released in the series from April 2005 to August 2007.

The game launched three years ago and has been received extremely well by gamers all around the world. One extremely positive thing to take out of this is that it is showing that the alternative MMO business model can actually work, one which does not rely on a subscription fee.

For example, World of Warcraft costs around $15 per month if you want to play. Guild Wars does not require the subscription price.

ArenaNet, is apparently already hard at work for a sequel to Guild Wars, Guild Wars 2, which is reportedly coming along quite nicely.

One thing is clear; the franchise certainly has a future in the MMO front as the free model is working very well for ArenaNet and publisher NCsoft.

World of Warcraft is a massively multiplayer online role-playing game. It is Blizzard Entertainment's fourth game set in the fantasy Warcraft universe, first introduced by Warcraft: Orcs & Humans in 1994. World of Warcraft takes place within the world of Azeroth, four years after the events at the conclusion of Blizzard's previous release, Warcraft III: The Frozen Throne. Blizzard Entertainment announced World of Warcraft on September 2, 2001.The game was released on November 23, 2004, celebrating the 10th anniversary of the Warcraft franchise. It is currently the world's largest MMORPG in terms of monthly subscribers.