Argentinians planning to travel to the northern part of the country, Brazil and Paraguay were lining up for vaccinations Tuesday, because of a yellow fever breakout that has killed at least 21 people in the region. 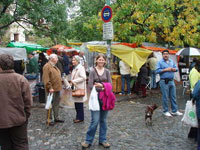 Public health officials recommend that anyone planning to travel to an affected area get the vaccine -- which is effective for a decade -- 10 days before arriving.

The Ministry of Health recommended that residents and travelers to the "high-alert" area in northern Argentina, near the borders of Brazil, Bolivia and Paraguay, also receive the vaccine.

On Monday,Paraguay's Ministry of Health and Social Welfare confirmed 16 cases, eight of them fatal, in two areas in the center of the country -- San Pedro Department and Central Department.

Brazil had tallied 13 deaths, the country's Ministry of Health said.

As of Saturday, more than half of the 2 million vaccine doses obtained by Paraguay from the World Health Organization had been administered, the government said.

Most people improve after three or four days, but some enter a second "toxic" phase that causes fever, jaundice and blood in the vomit, the health organization says. About half of the people who enter the second phase of yellow fever die within 10 days.

There is no treatment, so medical authorities recommend vaccinations.

Physicians and insect experts from Brazil, Cuba and Venezuela were sent to the poor South American nation to work with local officials on stemming the spread of the mosquito-borne illness that has already killed three and sickened over a dozen more.
France also is reportedly sending yellow fever vaccine to Paraguay to help deal with the outbreak, committing 1 million doses of the vaccine.