Canadian officials confirmed a new case of mad cow disease Tuesday. It is the second such case in two months and the 12th since the disease was first discovered in Canada in 2003. 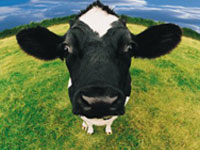 The Canadian Food Inspection Agency said no part of the carcass entered the human food or animal feed chains. The cow was detected in Alberta under a national monitoring program that targets cattle most at risk for the disease, also known as bovine spongiform encephalopathy.

The agency says it expects to detect a small number of cases over the next 10 years as Canada moves toward its goal of eliminating the disease from its herds.

U.S. Department of Agriculture Deputy Secretary Chuck Conner said Canada 's latest case would not affect trade with the U.S. "This is no cause for concern," Conner said.

The discovery of Canada 's first case in May 2003 caused the United States to suspend cattle imports from Canada , causing billions of dollars in losses to the Canadian industry before shipments were resumed.

More than two dozen nations suspended beef imports from the U.S. after a cow in Mabton , Wash. , tested positive for the brain-wasting disease in December 2003. That cow's origins were later traced to Canada . Two other cases of mad cow disease have been discovered in the U.S. since then.

Eating meat products with infected tissue is linked to a rare, fatal illness — variant Creutzfeldt-Jacob disease, which has killed more than 150 people worldwide, most of them in Britain .