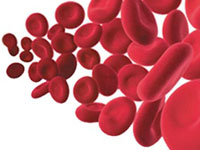 Amgen and J&J's anemia drugs are used to treat patients whose weakness and fatigue is caused by chronic kidney disease and from the side effects of chemotherapy. The medicines stimulate the production of oxygen-carrying red blood cells, which may boost patients' energy and strength.

About 7.5 percent of cancer patients who took Amgen's Aranesp or J&J's Procrit for anemia developed blood clots, compared with 4.9 percent who took placebos in trials of 13,000 patients, an analysis of 20 years of clinical trials found. The study, published in this week's Journal of the American Medical Association, found that people on the anemia drugs had a 10 percent higher risk of dying.

Amgen lost 32 percent of its market value last year after its anemia drugs were tied to risk of heart attack, stroke, and death at high doses. The Food and Drug Administration urged doctors to use the lowest doses possible. More than 4 million patients have taken Amgen's anemia medicines since 1989, the company said.

"There's a real potential risk here, and we as physicians need to do a better job of incorporating that risk into our practice," said study coauthor Samuel Silver, a hematologist/oncologist at the University of Michigan Medical Center in Ann Arbor.

Silver stopped short of saying he'd discontinue prescribing the medicines. The risk should be balanced against the danger of blood transfusions that patients might need if their anemia goes untreated, he said. The risks were mostly seen among patients taking high doses, he said.

Debate over the drugs' safety involves how big a dose to use to raise concentrations of hemoglobin, the protein that carries the oxygen. An FDA advisory panel is scheduled to meet March 13 to review the latest clinical trial results.

Amgen Inc. is an international biotechnology company headquartered in the Newbury Park section of Thousand Oaks, California. Located in the Conejo Valley, it is one of the top corporations in the Tech Coast area. Amgen is the largest independent biotech firm, with approx. 14,000 staff members including the 150 Allied-Barton Security staff and A-post personnel in 2007. Its products include EPOGEN, ARANESP, ENBREL, Kineret, Neulasta, NEUPOGEN, and Sensipar / Mimpara. EPOGEN and NEUPOGEN (the company's first products on the market) were the two most successful biopharmaceutical products at the time of their respective releases.

Johnson & Johnson is a global American pharmaceutical, medical devices and consumer packaged goods manufacturer founded in 1886. Its common stock is a component of the Dow Jones Industrial Average and the company is listed among the Fortune 500. Johnson & Johnson is known for its corporate responsibility and consistently ranks at the top of Harris Interactive's National Corporate Reputation Survey.