A study last month found that being in the hospital was no guarantee of getting prompt treatment for cardiac arrest. In that study, published in the New England Journal of Medicine, researchers found that one-third of patients don't get a potentially lifesaving shock within the recommended two minutes. 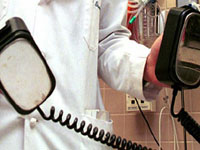 "Code blue”, as many hospitals call it, a signal sent over the intercom when a patient's heart has stopped. When code blue works well, a team speeds to the bedside and revives the patient.

The graveyard shift is the most dangerous time to call code blue, a new study has found. Patients are more likely to die if they go into cardiac arrest in a hospital after 11 p.m. , when staffing might be lower or patients watched less closely.

"Our findings should be a pretty big wake-up call to urge hospitals to critically evaluate how they are performing resuscitation," said the study's lead author, Dr. Mary Ann Peberdy of Virginia Commonwealth University Health System in Richmond .

The study didn't examine why results during day shifts and overnight shifts differed. But researchers found among the late-night cases a higher proportion of instances in which patients were found to have no heart electrical activity, when it was too late to deliver a potentially lifesaving shock.

The reason could be that staff members are tired, less experienced or too few. Weekends had lower survival rates than weekdays, but it wasn't as significantly different as it was between late-night and daytime hours.

Only in the emergency room was there no difference in survival between the day and night shifts.

The study was based on an analysis of more than 86,000 cardiac arrests in more than 500 hospitals over seven years.

After taking into account other factors associated with survival, the researchers found that the chances of surviving until discharge were 18 percent lower if the cardiac arrest occurred from 11 p.m. to 6:59 a.m.

A cardiac arrest is the abrupt cessation of normal circulation of the blood due to failure of the heart to contract effectively during systole.

A cardiac arrest is different from (but may be caused by) a heart attack or myocardial infarction, where blood flow to the still-beating heart is interrupted.

Cardiac arrest is a medical emergency that, in certain groups of patients, is potentially reversible if treated early enough.