Cancer killed more than 5,000 people across the USA in 2005, the American Cancer Society said Wednesday. The death rate caused by cancerous diseases continued to decline during the recent years, although it was only a slight decline after two years of more dramatic decrease. 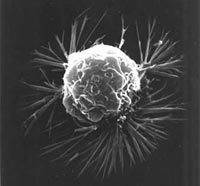 However, the year 2005 showed that the cancer death rate was no longer falling.

"The declining rate was no longer great enough to overcome the increase in population," said Elizabeth Ward, a co-author of the cancer society report.

Officials with the organization say they don't know why the decline in the death rate eased.

The Society is organized into 13 geographical divisions of both medical and lay volunteers operating in more than 3,400 offices throughout the United States and Puerto Rico. The National Home Office is located in Atlanta, Georgia.

The Society was originally founded in 1913 by 15 physicians and businessmen in New York City under the name American Society for the Control of Cancer (ASCC). The current name was adopted in 1945.

The sword symbol, adopted by the American Cancer Society in 1928, was designed by George E. Durant of Brooklyn, New York. According to Durant, the two serpents forming the handle represent the scientific and medical focus of the Society’s mission and the blade expresses the “crusading spirit of the cancer control movement."

Its activities include providing grants to researchers, running public health advertising campaigns, and organizing projects such as the Relay For Life, Great American Smokeout, Making Strides Against Breast Cancer, and Daffodil Days.

Among its notable endorsements is the Hopkins 4K for Cancer, a 4000-mile bike ride from Baltimore to San Francisco to raise money for cancer patients.