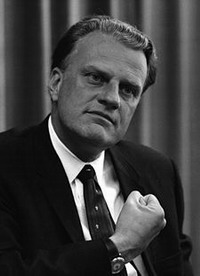 Earlier the evangelist has underwent the elective surgery to update a shunt that controls excess fluid on his brain.The shunt was first installed in 2000 and drains fluid from Graham's brain through a small tube, relieving excess pressure that can cause symptoms similar to Parkinson's disease.

He has suffered from Parkinson's disease for about 15 years, has had fluid on the brain, pneumonia, broken hips, and it has been recently revealed that he is suffering from prostate cancer.

On August 18, 2007, Graham, 88, was in fair condition in Mission Health & Hospitals in Asheville, North Carolina, after treatment for intestinal bleeding, but his condition was not life-threatening.

Graham has been a spiritual adviser to multiple U.S. presidents and was number seven on Gallup's list of admired people for the 20th century. He is a member of the Southern Baptist Convention.