By Anastasia Tomazhenkova: Five more children have tested positive for measles in San Diego, bringing to 11 the total number in the recent outbreak, authorities reported. Health officials are awaiting test results on a twelfth child. 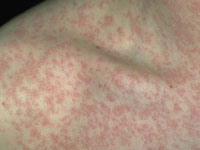 Over the past month, officials have tracked measles to schools, grocery stores and the Del Mar Fairgrounds.

One of the latest victims is an 8-year-old who may have spread the measles virus during a visit to Whole Foods Market in Hillcrest and later to a Cirque du Soleil performance at the fairgrounds.

Officials are warning that the highly contagious disease can be particularly dangerous to children. The virus can survive for about two hours after it is expelled by a cough or sneeze.

Dr. Mark Sawyer, a pediatrician and infectious disease specialist at Rady's Children Hospital in San Diego claimed that is the most measles cases in the city in 17 years.

The outbreak is believed to have started with a child who caught measles in Switzerland, then returned to the United States.

Sawyer said that measles was probably the most contagious infectious disease that they deal with and added, "It's a miserable experience for children to have the measles."

Measles can cause complications that can even lead to death, warned.
None of the 11 patients had been immunized.

"Parents need to know that vaccines are very, very safe, and there is a very complete structure to evaluate the safety of vaccines both before they're given to children or put on the market and afterwards," Sawyer said.

The classical symptoms of measles include a fever for at least three days, the three Cs - cough, coryza and conjunctivities. The fever may reach up to 40° Celsius. Koplik's spots seen inside the mouth are diagnostic for measles but are not often seen, even in real cases of measles, because they are transient and may disappear within a day of arising.

The characteristic measles rash is classically described as a generalized, maculopapular, erythematous rash that begins several days after the fever starts. It starts on the head before spreading to cover most of the body, often causing itching. The rash is said to "stain", changing colour from red to dark brown, before disappearing.

Complications with measles are relatively common, ranging from relatively mild and less serious diarrhea, to pneumonia and encephalitis, corneal ulceration leading to corneal scarring. Complications are usually more severe amongst adults who catch the virus.