By Anastasia Tomazhenkova: The researchers are disappointed. The testing of the first anti-AIDS vaginal gel failed. 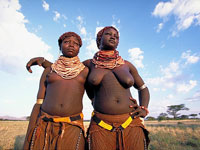 The researchers suppose that the study was marred by low use of the gel, which could have undermined results. Six thousand African women, that took part in the testing, used the gel less than half the number of times they had sex, and only 10% used it every time as directed.

The researchers are still analyzing the results to see if this made a difference. They also plan more tests on a revamped gel containing an AIDS drug that they hope will work better.

The gel used in the current study did prove safe, however, and researchers called that a watershed event.

But for now, the effort is the latest disappointment in two decades of trying to develop a microbicide - a cream or gel women could use to lower their risk of getting HIV through sex. A female-controlled method is especially needed in poor countries where women often can't persuade men to use condoms.

A year ago, scientists stopped two late-stage tests of a different gel after early results suggested it might raise the risk of HIV infection instead of lowering it.

The new study tested Carraguard, a microbicide developed by the nonprofit, New York-based Population Council. It contains carrageenan, which comes from seaweed and is widely used in the food and cosmetics industries as a gel, stabilizer and thickening agent. Lab, animal and early human tests suggested it might prevent HIV and other sexually spread infections.

The latest study was done from March 2004 through March 2007 in Gugulethu, Isipingo and Soshanguve, all in South Africa.

More than 9,000 women, average age 31, volunteered for the study. About 27% tested positive for HIV and were disqualified. In all, 6,202 women were randomly given either Carraguard or a placebo gel. Neither the women nor the study staff knew who received what. All received safe-sex counseling and condoms.

Women participated from nine months to two years, with 4,244 completing the study. About 18% dropped out, often because they became pregnant and the gel is not known to be safe for use in pregnancy. Another 13% could not be found for follow up information.

At the end of the study, there were 134 new HIV infections in the Carraguard group and 151 in the fake gel group - a rate of 3.3 infections per 100 women each year in the microbicide group and 3.7 for the placebo group.

However, women in the study used the gels only 44% of the time, and some used it hardly at all. Researchers are still analyzing the numbers to see what that means. If nonuse was far greater in the microbicide group than the placebo group, "it could have had an impact on our final study results," said Barbara Friedland, the study's behavioral coordinator.

A plus: reported condom use doubled, from 33% at the start of the study to 64% during it. Other sexually spread infections declined.