Everyone can view this celestial event; one should just bundle up and head outside. As long as sky is mainly clear this time of year, the chances to see this complete lunar eclipse are rather high. It peaks at 10:26 p.m. But any time between 8:45 p.m. and 12:15 a.m. at least part of the eclipse will be seen.
A lunar eclipse happens when the moon passes through the Earth’s shadow. Moon becomes vivid red, though one would expect it to grow more ashen than usual.
It turns red because that is the color of the Earth’s shadow, not the usual black shadow that a man casts on a sunny day. This can be explained by tiny dust particles in the Earth’s atmosphere. This dusty layer redirects the light of the sun, filling the dark area behind the Earth with a sunset-red glow.
This will be the last total lunar eclipse until December 2010. 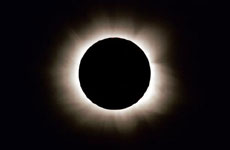