A new map to taste, chew and digest. This time is the map of man’s impact upon oceans. 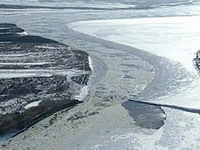 The annual meeting of the American Association for the Advancement of Science in Boston revealed the hard work of researchers that have studied 17 different man’s activities and created a map showing how and where people influence the seas.

It turned out to be worse than thought earlier. It goes without saying that natural phenomena such as volcanoes, algae blooms, storms, and earthquakes also cause major changes in water quality and the ecological status of water, but the main role is reserved by a man.

First of all, the scientists singled out the most vulnerable and affected areas. Among them are the North Sea, the South and East China Seas, Caribbean Sea, the east coast of North America, the Mediterranean Sea , the Red Sea, the Persian Gulf, the Bering Sea and parts of the western Pacific. The least affected areas are near the poles, what seems logical but short-lasting for now.

Damage leads to reductions in fish and sea animals as well as problems for coral reefs, seagrass beds, mangroves, rocky reefs and shelves and seamounts.

The study showed that more than 40% of the ocean ecosystems are impacted by human activities.

Another problem lies in the level of oxygen. Many currents bring nutrient-rich but oxygen-poor waters.