The galaxy has much in store and it shares its secrets with us step by step. This time is not an exception. 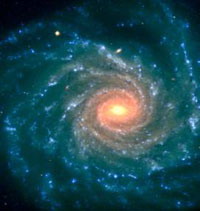 Two new planets were discovered in a solar system 5,000 light-years away. The planets resemble Jupiter and Saturn by structure, they are gas planets, but the giant are a bit smaller. They circle their star at a distance compared with that of Jupiter and Saturn from the sun.

The discovery proves the supposition that there are many planets orbiting their stars in ways similar to our solar system.

The scientists used the method called gravitational micro-lensing to discover these planets. A gravitational lens is formed when the light from a very distant, bright source (such as a quasar) is "bent" around a massive object (such as a cluster of galaxies) between the source object and the observer. The process is known as gravitational lensing, and is one of the predictions of Albert Einstein's general theory of relativity.

The discovery was possible thanks to the process when the star the planets orbit crossed in front of a more distant star, it was also contributed the nearer star that intensified the light shining from the farther star by some 500 times.

The discovery opened new doors for scientists and proved some of their expectations.