A “choking” game ceased to be merely a harmless game, when it started to show a high death toll. 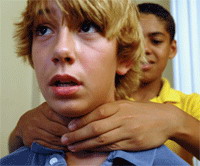 The Centers for Disease Control and Prevention released the statistic of victims, stating that at least 82 children have died in recent years as a result of playing this game. And about 1,800 people in the United States died in the past 10 years. The numbers are of course understated.

The choking game, also commonly known as the Fainting game, is a loose term that covers a number of quite distinct activities but all designed to induce a partial or complete loss of consciousness brought about by the intentional deprivation of oxygen to the brain.

Numerous variations exist under many local names and this is further complicated by the extensive folklore and mythology that surrounds the practice. However, all of these variations depend on one of only two underlying mechanisms: strangulation and self-induced hypocapnia.

The practice has been of growing concern to health authorities in many developed countries because of the neurological damage it causes. Any activity that deprives the brain of oxygen has the potential to cause moderate to severe brain cell death leading to permanent loss of neurological function ranging from difficulty in concentration or loss of short term memory capacity through severe, lifelong mental disability to death. Statistics on fatalities and neurological damage are controversial and no definitive, empirical study exists although the indications are that the practice is a significant contributor to death and disability, particularly among male juveniles in most developed countries. Many believe that damage is significantly underestimated because of false attributions to suicide and the difficulty of linking generalized, acquired neurological disability to a specific past event.

No empirical study is known to have been done on the reasons for its attraction but anecdotally stated reasons include:

- Peer pressure, a challenge or dare, a rite of passage into a social group or amusement over erratic behaviour.

- Curiosity in an altered state of consciousness, the experience of a brownout, an imagined approximation to a near death experience or more recently, copycatting elements of the film Flatliners

- A belief, not clearly substantiated, that it can induce a brief sense of euphoria.

- The prospect of intoxication, albeit brief, at no financial cost.

- An underlying lack of education concerning the physiological mechanisms involved and the risk of neurological damage or death.

- The promotion of this activity by Internet.

The practice goes by many other names in different parts of the world or simultaneously in a single location. The names are usually one of several types: ones that assign drug-like qualities to the game, ones that describe the effects, ones that emphasize the risks involved, and others that come from pop-culture references. Common names in the United Kingdom, Australia and North America include:

The signs indicating that a child plays this game include bloodshot eyes; marks on the neck; severe headaches; disorientation after spending time alone; ropes, scarves and belts tied to bedroom furniture or doorknobs or found knotted on the floor; or the unexplained presence of things like dog leashes, choke collars and bungee cords.