By Anastasia Tomazhenkova: Robert Klitzman's sister, Karen, was lost on Sept. 11, 2001 in the ruins of the World Trade Center . Grief-stricken, Klitzman became depressed, but he didn't realize it for a while. He is a psychiatrist. He can't become mentally ill, is it possible? 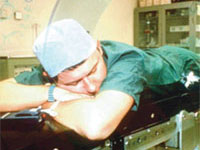 Once he realized that he indeed could doctor Klitzman decided to find out how physicians react when they fall ill.

He interviewed over 50 physicians who suffered from such diseases as HIV, Hodgkin's lymphoma, breast cancer, bipolar disorder and leukemia. Identified only by pseudonyms, they bared their souls to Klitzman. The result is a remarkable book, "When Doctors Become Patients," which sheds light on the medical profession's mind-set under duress.

Klitzman's study reveals that physicians tend to think the world is divided into two groups, doctors and patients, and that doctors will never get sick and morph into lowly patients.

"It's arrogance," a psychiatrist-in-training with breast cancer explains. "Doctors think it will never happen to them. But that is such a mistake. Because it can and probably will happen."

Then Klitzman studies what they do when it happens.

After the initial shock and denial, they have to make several decisions. Should the sick doctor be his own doctor? If he wants a colleague to be his doctor, which one should he choose and how much control should he give him? "Doctor-patients" also struggle with the thorny question of whether to tell their superiors, colleagues and patients about their illnesses, for going public could affect their practice, employment or promotion.

Some doctors emerge from their ordeal with newly found sensitivity and empathy for patients. A radiologist with cancer says he now "pretty much drops everything" to tell his patients about their test results. "When patients say, 'It's nice you did that,' I say, 'I've been there, and know what it feels like,"' he is quoted as saying.

There have been a couple of books in the past that presented first-person, stand-alone accounts of sick physicians, but Klitzman's is the first one ever to weave together those individual experiences and paint a comprehensive portrayal of wounded healers.

The author is uniquely qualified to tackle this intriguing subject. Not only has he personal experiences as a doctor and a patient, but he has researched disease-ravaged people before. He explored the world of HIV-infected individuals and wrote "Being Positive: The Lives of Men and Women with HIV." As a 21-year-old, college graduate, he traveled to Papua New Guinea to study an epidemic of kuru, a disease spread through cannibalism, for Nobel Prize in Medicine co-winner D. Carleton Gajdusek. He wrote about this extraordinary experience in "The Trembling Mountain: A Personal Account of Kuru, Cannibals, and Mad Cow Disease."

Klitzman, who has received several fellowships, including one from the Rockefeller Foundation, published his first book, "A Year-long Night: Tales of a Medical Internship" in 1989. His forte as a researcher-author is that he always takes a multidisciplinary approach to his subject, and gives it a very personal touch by sharing his own feelings with readers. That makes all his books emotionally appealing as well as academically valuable.

The material contained in "When Doctors Become Patients" should provoke deep thoughts in all potential patients - in other words, everybody.