By Margarita Snegireva. A research team announced yesterday that it has identified about 270 human proteins that the AIDS virus apparently needs to infect a person, instantly providing researchers with dozens of new strategies for blocking or aborting HIV infection. 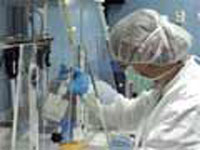 The vast majority - more than 200 - were not previously known to play a role in the complicated choreography by which the virus attaches to a cell, enters it, gets copied and establishes permanent residence.

The discovery was made with a technique called a "genome-wide scan," which is only a few years old.

HIV is different in structure from other retroviruses. It is about 120 nm in diameter (120 billionths of a meter; around 60 times smaller than a red blood cell) and roughly spherical. It is composed of two copies of positive single-stranded RNA that codes for the virus's nine genes enclosed by a conical capsid composed of 2,000 copies of the viral protein p24. The single-stranded RNA is tightly bound to nucleocapsid proteins, p7 and enzymes needed for the development of the virion such as reverse transcriptase, proteases, ribonuclease and integrase. A matrix composed of the viral protein p17 surrounds the capsid ensuring the integrity of the virion particle. This is, in turn, surrounded by the viral envelope which is composed of two layers of fatty molecules called phospholipids taken from the membrane of a human cell when a newly formed virus particle buds from the cell. Embedded in the viral envelope are proteins from the host cell and about 70 copies of a complex HIV protein that protrudes through the surface of the virus particle. This protein, known as Env, consists of a cap made of three molecules called glycoprotein (gp) 120, and a stem consisting of three gp41 molecules that anchor the structure into the viral envelope. This glycoprotein complex enables the virus to attach to and fuse with target cells to initiate the infectious cycle. Both these surface proteins, especially gp120, have been considered as targets of future treatments or vaccines against HIV.