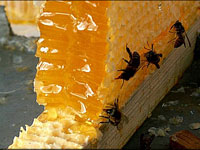 For at least 2700 years, honey has been used to treat a variety of ailments through topical application, but only recently have the antiseptic and antibacterial properties of honey been chemically explained. As an antimicrobial agent honey may have the potential for treating a variety of ailments. One New Zealand researcher says a particular type of honey may be useful in treating MRSA.  Antibacterial properties of honey are the result of the low water activity causing osmosis, hydrogen peroxide effect, and high acidity.

Derma Sciences Inc., a New Jersey company that makes medicated and other advanced wound care products, began selling the first honey-based dressing this fall after it was approved by the U.S. Food and Drug Administration.

Called Medihoney, it is made from a highly absorbent seaweed-based material, saturated with manuka honey, a particularly potent type that experts say kills germs and speeds healing. Also called Leptospermum honey, manuka honey comes from hives of bees that collect nectar from manuka and jelly bushes in Australia and New Zealand.

Derma Sciences now sells two Medihoney dressings to hospitals, clinics and doctors in North and South America under a deal with supplier Comvita LP of New Zealand. Derma Sciences hopes to have its dressings in U.S. drug stores in the next six months, followed by adhesive strips.

Comvita, which controls about 75 percent of the world's manuka honey supply, sells similar products under its own name in Australia, New Zealand and Europe, where such products have been popular for over a decade.

"The reason that Medihoney is so exciting is that antibiotics are becoming ineffective at fighting pathogens," said Derma Sciences CEO Ed Quilty.

Another big advantage, he said, is that the dressings' germ-fighting and fluid-absorbing effects last up to a week, making them convenient for patients being cared for at outpatient clinics or by visiting nurses. They also reduce inflammation and can eliminate the foul odors of infected wounds.

Since receiving FDA approval, Medihoney has brought in sales of $150,000 (Ђ104,181) in 10 weeks and Quilty plans to nearly double his 15-person sales force in 2008 thanks to the two new Medihoney products.

Honey dressings and gels, as well as tubes of manuka honey, have been gaining in popularity overseas, fueled by scientific reports on their medical benefits and occasional news accounts of the dramatic recovery of a patient with a longtime wound that suddenly healed.

Regular honey can have mild medicinal benefits. A study published Dec. 3 showed it helps to calm children's coughs so they can sleep. But manuka honey is far more potent, research shows.

Dr. Robert Frykberg, chief of podiatry at the Veterans Affairs Medical Center in Phoenix, said the Medihoney product has worked on about half the patients with diabetic foot ulcers who have used it.

He said the Medihoney dressing can also prevent the dangerous drug-resistant staph infection known as MRSA from infecting open wounds.

"It's been used on wounds where nothing else will work," said biochemist Peter Molan, a professor at the University of Waikato in New Zealand who has researched honey and other natural antibiotics for 25 years.

He's found manuka honey can kill the toughest bacteria even when diluted 10 times and recommends it especially for people with weak immune systems.

"There's more evidence, clinical evidence, by far for honey in wound treatment than for any of the pharmaceutical products" for infection, Molan said. However, it won't work once an infection gets in the blood. "It's not a miracle."

Some U.S. hospitals and wound care clinics are already using Medihoney dressings to treat patients with stubborn, infected wounds from injuries or surgical incisions and nonhealing pressure ulcers on diabetics' feet, which too often lead to amputations.

Kara Couch, a nurse practitioner at Georgetown University Hospital's Center for Wound Healing in Washington, said it works well for patients who have "wound pain" or infected wounds.

One patient who had an open wound that didn't heal for a few years "healed 90 percent in three weeks," she said, adding that the usual rate for chronic wounds is barely 10 percent a week.

David Crosby, a retired insurance claims examiner from Hanover, Massachusetts, began using Medihoney two months ago on a 2 1/2-year-old burn on his leg after high-tech treatments did not help. The burn's size has shrunk by half and it continues to heal.

"At this stage, any improvement's better than nothing," Crosby said.

At a military clinic for Iraqi children, he used it on patients with severe burns from cooking fuels, open fires and explosions. He said Iraqi families soon preferred the honey over other treatments because it was natural and because the honey dressings don't need to be changed as often as traditional ones. The children also healed more quickly and with less complications, he said.

After seeing its success in Iraq, Lambrecht, who has five children of his own, is a fan.

"I would use the Medihoney on burns on my children, as the first choice, without question," he said.