The world is watching with suspense the war between Blu-ray Disc and HD DVD. The time shows that each of the opponents had bright moments of support and high sales and that of slow progress and criticism. 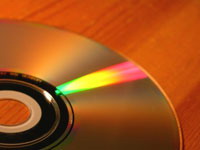 Blu-ray Disc is a high-density optical disc format for the storage of digital information, including high-definition video.

Blu-ray was developed by the Blu-ray Disc Association, a group of leading companies representing consumer electronics, computer hardware, and motion picture production. The standard is covered by several patents belonging to different companies.

The primary rival to Blu-ray Disc is HD DVD. As of November 2007, HD DVD has the advantage in maximum disc capacity (51 GB triple-layer versus 50 GB dual-layer). However, no movies are currently scheduled to be released on the triple-layer disc; thus, Blu-ray has the advantage in currently available capacity. It is unknown at this time whether the final triple-layer HD DVD specification will be compatible with current players. As of November 2007, 44% of Blu-ray titles use the 50 GB disc and 56% use the 25 GB disc while almost all HD DVD movies are in the 30 GB dual layer format.

In terms of audio/video compression, Blu-ray Disc and HD DVD are similar on the surface: both support MPEG-2, VC-1, and H.264 for video compression; and Dolby Digital, PCM, and DTS for audio compression. The first generation of Blu-ray Disc movies released used MPEG-2 (the standard currently used in DVDs, although encoded at a much higher video resolution and a much higher bit rate than those used on conventional DVDs), while initial HD DVDs releases used the VC-1 codec. Due to greater total disc capacity, the Blu-ray Disc producers may choose in the future to utilize a higher maximum video bit rate, as well as potentially higher average bit rates. As of November 2007, 41% of Blu-ray Discs are encoded in MPEG-2 while AVC is used on 33% of discs and VC-1 on 26%.

In terms of audio, there are some differences. To ensure backwards compatibility with older receivers with Dolby Digital decoders, Blu-ray Disc allows conventional Dolby Digital audiotracks at 640 kbit/s and this is the primary audio track for 33% of Blu-ray titles, while it has gone unused for HD DVD titles. The newer Dolby Digital Plus is mandatory for HD DVD players at 3 Mbit/s (and is used in 90% of HD DVD titles), while optional for BD players with support at a bitrate of 1.736 Mbit/s for mixes that require more than 5.1 channels (has only been used on two titles). Both formats optionally support DTS-HD High Resolution Audio, a lossy compression scheme that extends the core DTS audio for better fidelity but yet is still not lossless.

Both HD DVD and Blu-ray Disc support the 24p (traditional movie) frame rate, but technical implementations of this mode are different between the formats. Blu-ray Disc supports 24p with its native timing, while HD DVD uses 60i timing for 24p (encoded progressively, replacing missing fields with "repeat field flags"). Decoders can ignore the “flags” to output 24p. There is no impact on picture resolution and minimal impact on storage space as a result of this, as the HD DVD format often uses the same encoded video - it simply adds notational overhead.[clarify]

There is no Region Coding in the existing HD DVD specification, which means that titles from any country can be played in players in any other country. However, a significant percentage of Blu-ray disks have Region Coding and will only play in players sold in the corresponding geographic region.

Since both formats launched in the spring of 2006, an estimated 4.98 million high-definition discs have been sold, including 3.01 million in Blu-ray and 1.97 million in HD DVD through the end of September, 2007. However, those figures are dwarfed by the sales of regular DVDs. Combined, the two high-def disc formats accounted for only 2.5 % of overall disc sales during the first half of 2007.

The end of the format war is out of sight and it’s still unclear who will become the leading carrier for high-definition content to consumers.