The United States tried to underline the injustice at a major climate change conference, that the rest of the world does not notice steps it takes to tackle rising temperatures, to promote energy efficiency and switch to cleaner technologies. 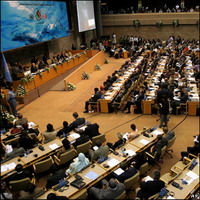 U.S. delegates on the sidelines of the U.N. meeting said America had spent more than any other country - US$37 billion (25.1 billion EUR) - since 2001 on climate change-combating activities and was working to boost the use of cleaner technology and help jump-start negotiations for an agreement that will replace the Kyoto protocol in 2012.

"We are so serious about this that we are pushing to conclude the negotiations within two years by end of 2009," said Jim Connaughton, the chairman of the White House Council on Environmental Quality, in a panel presentation. "We also are serious enough that we are putting a major investment into technologies that we need tomorrow - how to produce power from coal with low emissions, how to power vehicles with low emissions. These are enormous undertakings and we have to be more aggressive with them," he said.

Since the conference began last week, the United States has been on the defensive over its refusal to accept emissions reduction targets of 25 percent to 40 percent. The European Union and other governments say the figures are based on sound science and necessary to rein in global warming.

The U.S. said it didn't want to prejudge negotiations by agreeing to targets and there were other options to lowering emissions. But most environmentalists listening Wednesday came away unconvinced.

They said the U.S. presentation - which promoted ramping up energy efficiency, nuclear power, renewable energy and biofuels to reduce climate change - failed to include necessary emission reduction targets or discussions on setting a price for carbon dioxide pollution.

They accused the administration of President George W. Bush of hypocrisy for promoting cleaner energy options, while at the same time threatening to veto an energy bill passed by the U.S. House of Representatives that includes requirements that electric utilities produce 15 percent of their power from solar, wind and other renewable energy sources.

"The presentation was an impressive display of a variety of important initiatives but the parts don't add up to a meaningful whole if there is no leadership," said Kevin Knobloch, the president of the Union of Concerned Scientists.

"What the United States desperately needs to do at these talks is make it very clear that we are ready to accept responsibility for our historic and current emissions and then help the rest of the world to the next round of binding commitments."

Alexander Karsner, the U.S. Assistant Secretary of Energy, said such criticism ignored what the United States is already doing. For example, U.S. ethanol production has increased by 250 percent since 2000, and new energy capacity coming on line from renewable sources has gone from 2 percent in 2004 to 22 percent in 2006.

The numbers for renewable energy additions were comparable to Germany and Japan, he said, and higher than many other European nations.