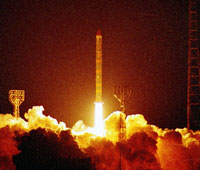 The Kosmos-3M rocket carrier, carrying a German SAR-Lupe satellite, was launched into space from the Plesetsk base in northern Russia, military officials at the base said.

This was the third launch of German satellite technology, the previous two taking place in July 2007 and December 2006.

A total of five satellites will ultimately comprise the SAR-Lupe system, which will be Germany's first satellite-based reconnaissance system, providing high-resolution radar images night and day.

Russia has been aggressively trying to expand its presence in the international market for commercial and government satellite and space-industry launches, though its efforts have seen several high-profile failures