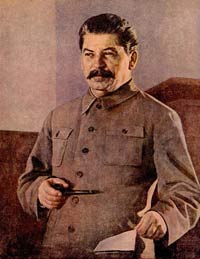 She died Monday evening at Burdenko military hospital in Moscow after a prolonged illness, a hospital official said, speaking on condition of anonymity because she was not authorized to give her name to the media. The official would not give the cause of death.

Dzhugashvili's father, Yakov - Stalin's eldest son - was a Soviet senior lieutenant who historians say died at the Nazis' Sachsenhausen camp in 1943 after Stalin declined to swap him for a captured German general. The circumstances of his death were unclear, with conflicting contentions that he committed suicide or was murdered.

In 2003 in Moscow, a U.S. Defense Department official presented Dzhugashvili with documents that a U.S. military official, speaking on condition of anonymity, said indicated her father was shot trying to escape.

Recently, however, Dzhugashvili had argued that her father was never taken prisoner by the Germans - a sensitive issue because Stalin treated Soviet soldiers who surrendered or were taken prisoner as traitors.

In a book excerpt and an interview, both published in June in the Russian tabloid Komsomolskaya Pravda, she was quoted as claiming that Yakov Dzhugashvili died in battle in 1941. She asserted that photographs and letters indicating he was at the prison camp were falsified as part of a Nazi plot aimed at dealing a blow to Stalin.

She said that, had Stalin believed Dzhugashvili had surrendered to the Nazis, he would not have treated her as kindly as he did or told her that she looked like her father.

At the ceremony with the U.S. officials in 2003, Dzhugashvili said that her recollections of her grandfather were "a child's memories - the best and most tender." She said Stalin had been "very tender" with her because she was a girl.

Stalin, whose original surname was Dzhugashvili, ruled the Soviet Union with an iron fist until his death in 1953. Tens of millions of people were executed or deported to prison camps under his rule.