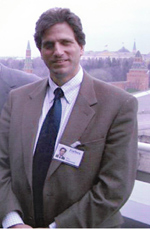 The U.S. urged Russia to boost investigation over the killing of American journalist Paul Klebnikov, who was gunned down three years ago in Moscow.

"It's obviously important in the view of the U.S. government that this investigation be pursued vigorously and concluded successfully, and that those responsible be brought to justice," U.S. Ambassador William Burns said Monday outside Moscow's Christ the Savior Cathedral, where a memorial to Klebnikov was held.

Klebnikov was editor of Forbes magazine's Russian edition. Speculation on the motive behind his killing on July 9, 2004, centered around his magazine's articles about Russia's shadowy business world and around a book he had written about Chechen separatist figure Khozh-Akhmed Nukhayev.

Two Chechens were charged with committing the killing on behalf of Nukhayev, but were acquitted in 2006. The Supreme Court ordered them tried again on the charges, but trial has been suspended since March after one of the defendants failed to show up for proceedings.

U.S. State Department spokesman Sean McCormack said Monday that the United States "encourages (Russia) to rededicate itself to making resolution of this case a law-enforcement priority."

Critics of Russia's justice system, which is widely seen as lacking independence from the Kremlin, have said prosecutors failed to properly pursue other lines of investigation in the case.

"We cannot be happy with the first trial. There were too many problems, too many instances of misconduct," Klebnikov's brother Peter said outside the church. "What happened to date does not make us proud to be of Russian heritage."