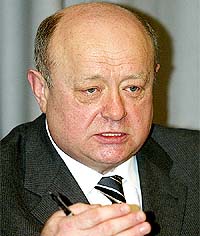 Russia has 31 reactors at 10 nuclear power plants, accounting for 16-17 percent of its electricity generation.

Putin has called for increasing the proportion of nuclear-generated power to at least 25 percent by 2030. Russia is also seeking increased involvement in nuclear industries abroad and is establishing a facility for the enrichment of uranium for countries that want nuclear power.

According to Putin's decree, Atomenergoprom and its affiliates will be responsible for a wide array of nuclear industry activities, including research and development, fuel extraction, power plant construction and management and waste disposal.

The head of the Federal Atomic Energy Agency, Sergei Kiriyenko, has been named chairman of the new company and his deputy Vladimir Travin as its director, the agency statement said.