Church bells pealed in Moscow as leaders of the Russian Orthodox faith signed a pact on Thursday healing a historic schism between the church in Russia, which for decades cooperated with Soviet authorities, and an offshoot set up abroad after the 1917 Bolshevik Revolution. 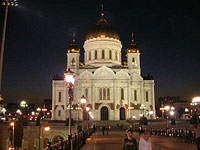 Worshippers and white-robed clergy thronged the Christ the Savior Cathedral, symbolic of Russia's rejection of its communist past, when atheism was state doctrine and many believers were arrested and imprisoned.

The ornate white building, with its shimmering gold domes on the Moscow River, is a replica built in the 1990s to replace the original, which was blown up in 1931 under orders of Soviet dictator Josef Stalin.

"In 1917 a tragedy began - the division of the church, the division of the people," said Vladimir Tenekov, one of thousands who waited in intermittent rain to attend the ceremony. "Now the opposite is happening. The church and the people are being unified. Such a thing only happens once in a century, or many centuries."

The church abroad split from the Moscow Patriarchate three years after the 1917 revolution and cut all ties in 1927, after the leader of the church in Russia, Patriarch Sergiy, declared loyalty to the Communist government.

The Russian Orthodox Church said that Sergiy hoped to save the church from annihilation, but the breakaway group regarded the decision as a betrayal - and saw itself as the true protector of the faith.

Following the collapse of the Soviet Union in 1991, the two churches began discussions of reunification. The Moscow Patriarchate last year disavowed Sergiy's declaration, setting the stage for Thursday's reconciliation.

Laurus has said that the reunion pact signed Thursday - called the Canonical Communion Act - does not mark a merger, and that his branch would maintain administrative control over its 400-plus parishes worldwide.

The Moscow Patriarchate, meanwhile, counts about two-thirds of Russia's population of 142 million as members. There are also, the church says, millions more believers in other the other former Soviet republics.

Under the pact, each church would maintain its own council of bishops. But their clergy would be able to lead services, and their parishioners to take communion in both churches.

"Cathedral prayer is more important than private prayer," Archbishop Mark of the church abroad told Russia's Channel One television Wednesday. "It's the center of our life, thus our communion will take place at all the levels of our church life."

For leaders of the faith, Thursday marked the real end of the Bolshevik revolution, which divided Russia's religious community along with the rest of society, said Andrei Zolotov, and expert on the church and chief editor of Russia Profile magazine.

It was "first time that a schism is being healed without saying one side was right and one side was wrong," Zolotov said, adding that the negotiations were difficult.

Alexy told RIA-Novosi on Wednesday that "there were times when it was hard to imagine that the reunification would occur."

Both churches formed working groups after a 2003 visit to Russia by three emigre archbishops and a 2004 visit by Laurus.

But analysts said that, while the pact would heal some divisions in the church, it could open others.

For example, some members of the church abroad felt the Moscow patriarchy had not gone far enough in confronting its communist-era cooperation with authorities, said Michael Bourdeaux, president of Britain's Keston Institute, which studies religious issues in the former Soviet Union. "You heal one schism and you create another," he said in a telephone interview Wednesday.

Alexy stressed that the Russian Orthodox Church Outside of Russia would retain its property and financial independence, and predicted that its autonomy would not change "in the foreseeable future."

But "maybe this will change in decades," he was quoted as saying this week by the ITAR-Tass news agency.

For many believers, the pact symbolized the church's resurrection after the Soviet era.

"We will be together, we will be closer to God," said Tatyana Melnikova, her faced framed by a headscarf, as she waited to enter the cathedral.