Unidentified assailants beat two men from Tajikistan to death and injured another in what Moscow sees a hate attack. 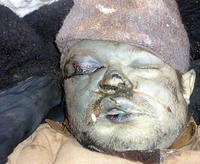 The bodies of two Tajik citizens, with fatal head injuries, were found in southern Moscow early Sunday, and another alleged victim of the same attack was hospitalized, ITAR-Tass and Interfax reported, citing city prosecutors. The reports said the men worked at a market in the area.

Russia has seen a marked rise in xenophobia and racism in recent years, with numerous of attacks on foreigners - many of them from the former Soviet republics in Central Asia and the Caucasus - as well as members of ethnic minorities within Russia and Jews.

A small bomb exploded in a synagogue in the Volga River city of Saratov early Sunday morning, causing minor damage to the building, RIA-Novosti and Interfax reported, citing Jewish community leaders. Nobody was hurt.

Many Tajiks and migrant laborers from other Central Asian nations work in Russia at food and goods markets and in construction.

Last year, 53 people were killed and 460 others injured in apparent hate crimes in Russia, according to the Sova human rights center, which monitors xenophobia.

Police and prosecutorial officials could not immediately be reached for comment.