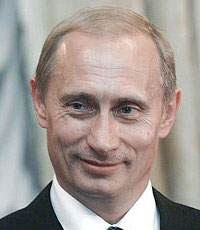 President Vladimir Putin accentuated Friday that Moscow would oppose the U.S. plan of deployment of missile defense systems in central Europe and would take measures to react.

Putin repeated his rejection of U.S. insistence that the interceptor missiles and radar systems Washington wants to deploy in Poland and the Czech Republic is aimed at neutralizing a potential treat from Iran, saying no such threat exists or is likely to anytime soon.

Moscow has argued that the U.S. is trying to target Russia's strategic missile arsenal.

Putin made the remarks after meeting with Czech President Vaclav Klaus, who said "I strove to explain to President Putin that from the Czech side this plan is not directed against the Russian Federation."

But Putin said "these systems will control Russian territory up to the Urals - if, of course, we do not take action in response, and we will."

The Ural Mountains divide European Russia from its Asian section. Putin equated the planned missile defense system with the deployment of U.S. missiles in Europe during the Cold War and said it would "cardinally change the security system in Europe."

Russia has repeatedly and vocally criticized the U.S. plan. U.S. Defense Secretary Robert Gates traveled to Moscow this week in an attempt to ease Moscow's concerns, but Russian officials have continued to lash out over the issue.

Putin said Russia was ready to invite "specialists from Poland, the Czech Republic or other countries to prove to them with the very simplest documents that neither terrorists ... nor Iran nor North Korea" has missiles that would require such a defense system."

"We see no argument at all for the deployment of missile defenses systems in Europe, there is no basis for it," he said.

"Iran ... does not have such (missile) systems and they are not foreseen," he said. "As for terrorists - this is just laughable; they use different methods."