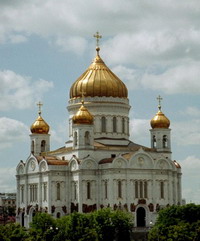 Russia's farewell to Boris Yeltsin will be filled with symbols and ceremonies to reflect the epochal changes in the modern history of Russia that were made during his 8 years of presidency.

But how average Russians will mark the passing of the man who transformed their lives for better or worse was unclear Tuesday, as public viewing began of the body of the first president of post-Soviet Russia. Foreign countries also seemed unsure - many of them designating second-tier dignitaries to attend the funeral.

About 300 people lined up for the start of public viewing of the body of Yeltsin, who died Monday at age 76. His coffin was placed in Moscow's Christ the Savior Cathedral - a vast, gleaming church that is the most potent emblem of the Russian Orthodox revival after decades of Communist official atheism.

The cathedral is a replica of the original, which sat on the banks of the Moscow River not far from the Kremlin. It was blown up by the Soviet authorities in 1931, just a few months after Yeltsin's birth.

The plan was to use the site for a skyscraper called the Palace of Soviets topped by a statue of Vladimir Lenin - essentially a secular temple - but the ground proved too shaky for its foundations.

Sixty years to the month after Soviet authorities knocked the cathedral down, the foundations of the Soviet Union itself collapsed. In 1994, Russia began to rebuild the church.

Yeltsin, although he made appearances at church services, was not seen as an overtly pious man, but the Russian Orthodox Church credits him as a key figure in its changed fortunes.

"By his strength, he helped the restoration of the proper role of the Russian Orthodox Church in the life of the country and its people," church spokesman Metropolitan Kirill said in a statement.

Yeltsin's burial on Wednesday also resonates with Russia's changes. Unlike most Soviet leaders, he won't be interred in the cold formality of the burial ground at the Kremlin walls; instead, his grave will be at Novodevichy Cemetery, a leafy and comforting expanse next to Moscow's most famous monastery.

It is largely a burial site for dreamers and artists, rather than politicians; its graves include those of Anton Chekhov, Sergei Prokofiev and the Stalin-era author Mikhail Bulgakov, one of Russia's most beloved modern literary figures. But one political figure as vivid and complex as Yelstin already lies there - Nikita Khrushchev.

Khrushchev, like Yeltsin, was a maverick leader with often crude manners. Like Yeltsin he brought a wave of fresh air into the stifling atmosphere of monolithic Communism. Both leaders raised wide hopes for Russia's development. Both ended their careers divorced from power, both carrying the faint odor of disgrace.

Yeltsin is remembered not only for his bold and principled stand against the 1990 hardline Communist coup attempt and for launching Russia on the path to political pluralism, if not a full-fledged democracy.

He also is remembered for the economic torment that afflicted tens of million of Russians during his presidency, as the country sold off its industrial and natural-resources wealth in shadowy auctions, for the disintegration of the public health care system and for pensions that turned to cinders in the fires of raging inflation.

"In modern Russian history there was probably no other person in whom people placed more trust and more expectations - and were more easily disappointed by - than Yeltsin," Vladimir Solovyov, a talk-show host on Serebrany Dozhd radio, said Tuesday.

"He was a man who did everything for his own life, but who did not fulfill all the political promises he made," said Moscow resident Olga Dmitrievna.

Television reports on Yeltsin on the day after his death were relatively brief and perfunctory for someone who played such an important historical role.

Russia's deep ambivalence about the man has left many wondering here how many mourners will file past his coffin or line the city streets for the funeral procession. Even if there are crowds, it is likely they'll be smaller than for the funerals of Soviet leaders - when public viewings could last for days.

But one element reminiscent of the Soviet era will be in force. President Vladimir Putin called on broadcasters not to broadcast any entertainment programs on Wednesday, which has been declared a national day of mourning.

A full list of foreign dignitaries attending the funeral has not been released. But Japan was to be represented only by its ambassador and Germany was sending its largely ceremonial president.