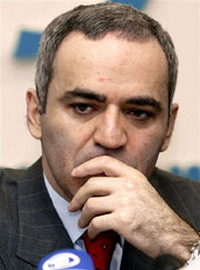 Russian opposition leader Garry Kasparov was questioned be investigators of FSB days after police crackdowns on anti-government demonstrations in Moscow and St. Petersburg.

Kasparov said investigators from the Federal Security Service, or FSB, asked him about recent statements he made to a radio station and items in a newspaper published by his opposition group, the United Civil Front, urging people to attend the weekend demonstrations.

"They were looking for some extremist statements or signs of extremist activities," the former world chess champion said, appearing upbeat as he emerged from nearly four hours in an office of the FSB, the main successor of the Soviet KGB, near its headquarters on Moscow's Lubyanka square.

"It's totally groundless. All of our statements were aimed at peaceful progress," he said.

Kasparov, who has become a vocal critic of President Vladimir Putin and is seeking to unite opposition forces before crucial elections over the next year, was among the chief organizers of the rallies - the latest in a series of so-called Dissenters' Marches aimed to show Russians and the world that opposition to Putin's government is strong.

Kasparov was detained Saturday while trying to lead a small group of protesters through lines of police ringing the Moscow square where opposition forces planned to hold an unauthorized demonstration and march. One of hundreds of people detained in connection with the weekend demonstrations, he was released hours later and fined for participating in the rally.

Officers clashed with about 200 demonstrators outside the police precinct where Kasparov was being held, beating them with nightsticks and fists. Police also beat dozens of people after an authorized demonstration in St. Petersburg on Sunday, and earlier demonstrations in St. Petersburg and the Volga River city of Nizhny Novgorod were also forcefully broken up.

The crackdown has drawn widespread criticism from human rights groups and reinforced opposition contentions that the government is strangling democracy and suppressing dissent before December parliamentary elections and a presidential vote next March. Putin is constitutionally barred from running for a third straight term, and analysts say those surrounding him want to ensure they remain in power.

Kasparov stressed that protests have been peaceful. "There was not a single act of violence, there were no broken windows," he told reporters.

The Moscow branch of the FSB confirmed its investigators had met with Kasparov, but refused to comment further. A decision to prosecute Kasparov on charges of inciting extremism would raise the stakes in the Kremlin's confrontation with opponents.

"They have no hook to proceed with criminal charges, but today in Russia, we know that nobody is safe," Kasparov said.

His aide, Marina Litvinovich, also said that the FSB's suspicions were groundless.

"The FSB is equating dissatisfaction with the current Russian leadership with extremism," she said. "If you shout a slogan against Putin, you are labeled an extremist."

In December, authorities raided the United Civil Front's office, taking copies of documents in a search they said was connected to suspicions it was involved in extremist activity, according to Litvinovich. Kasparov said at the time that the search was an example of Russian authorities using laws on extremism to crack down on dissent.

On Thursday, a Moscow court granted the chief prosecutor's request to classify the National Bolshevik Party, whose supporters also participated in the recent protests, as an extremist organization. The ruling will allow for tougher punishment for alleged members and could discourage other Kremlin opponents from joining them in protests.