Mistrust between EU and Russia 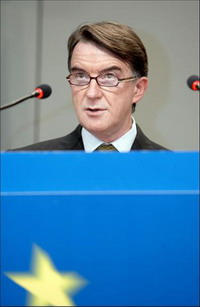 Mistrust between EU and Russia

Both Russia and EU disbelieve each other, particularly, the reason is energy, EU Trade Commissioner Peter Mandelson will say Friday as he calls on Moscow to make reforms.

Relations between the EU and Russia "contain a level of misunderstanding or even mistrust we have not seen since the end of the Cold War," he will tell a conference in Bologna, Italy, according to prepared remarks distributed by his office.

"Each suspects the other of double standards. Both believe the other is using the energy weapon as an instrument of politics. Neither thinks they enjoy the respect and goodwill from the other they are entitled to expect," he said.

The only long-term solution for Russia was to push ahead with reforms to implement the rule of law in a transparent, impartial manner, he said, repeating the EU's call for Russia to open up its market to foreign traders.

He called again for rules to govern global energy trading, saying Europe and Russia would both benefit from removing the political dimension. That would help calm Europe's worries over the security of its supplies and spur investors put much-needed money into Russian infrastructure.

"We should seek to explain why the rule of law must be the highest goal in Russia if the country is not to become trapped in the false strength of a petro-state," Mandelson said.

But this goes both ways, he said, and Europe should not give the impression that it is determined to avoid becoming dependent on Russia oil and gas at all costs.

Europe must also be open to investment from Russia, he said, referring to state gas monopoly OAO Gazprom's interest in supplying European customers directly. Rules that allow investment to flow both ways would interlock markets and deepen stability, he said.

Russia should be drawn into the international trading system to diversify its economy away from its reliance on lucrative oil and gas revenues, he said, describing World Trade Organization membership as something that would strengthen Russia's economy, boost investment and trade and help depoliticize and calm trade disputes with Europe.

"Russia needs to be in the WTO and we have a duty to assist this, which is why I am frustrated by our continuing bilateral disagreement on a number of issues," he said.

The start of EU-Russia trade talks on a new pact stalled last year on a Polish veto as it called on Moscow to lift a food safety ban on Polish meat - an issue officials are still working to resolve.

Mandelson was critical of Europe's policy towards Russia over much of the past decade, saying its incoherence had been "frankly alarming."

But he said he understood why Russian President Vladimir Putin was popular at home since he had "extinguished chaos."

"While Russia has succeeded in restoring order, it has not yet done so fully by imposing the rule of law even-handedly and consistently," Mandelson said. "In the modern age, the essential characteristics of a country with Russia's huge potential cannot be heavy, centralized political control, and an economy based on the rents from energy resources."

"Russia's strength in the 21st century will be built on a dynamic, diversified economy in which the state gets out of not in to the business of business," he said.