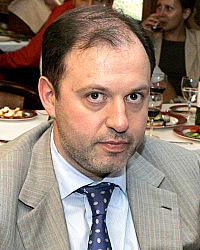 Some of the foreign oil, mining and gas companies have exaggerated their reserves to boost their share price, the deputy head of Russia's environmental watchdog agency said Thursday.

Oleg Mitvol called upon the economic security department of the Federal Security Service - the KGB's main successor _ to review certain foreign companies that have allegedly exaggerated their reserves and sold shares on foreign exchanges between 2003 and 2007.

The announcement comes one day after Mitvol made similar remarks about a London-listed oil company that wiped US$200 million (EUR147 million) off its value.

"We are dealing with artificially puffed up shell-firms ... that bring in profits on western stock exchanges using financial instruments without investing sufficient funds in the real sector of the Russian economy," Mitvol said in a statement posted on the Web site of the Natural Resources Ministry.

Ministry spokesman Rinat Gizatulin said there were "over ten" companies with an average market capitalization of between EUR1 billion and EUR2 billion (US$1.4 billion and US$2.7 billion) that had been targeted, but declined to disclose names. "In Russia hardly anyone has heard of these miracle-companies," he said.

On Wednesday, Mitvol said that foreign auditors for London-listed Imperial Energy PLC had put its reserves at its Mayskoye field in Siberia at 10 times the ministry's own estimate. The company's share price fell 25 percent on the remarks Wednesday.

Imperial Energy's chairman, Peter Levine, said in a statement that his company's actions in Russia had been "exemplary."

"We are confident that these issues are a result of misunderstandings and that they will be resolved in the near future," he said.

Mitvol said in a separate statement Thursday that he had appealed to Rosnedra, an agency that has the authority to revoke licenses, to pull production permits belonging to three of Imperial Energy's subsidiaries, citing violations.

Mitvol was the face of an environmental campaign against Royal Dutch Shell PLC's giant liquefied natural gas development off the Pacific coast last year. Analysts said that Mitvol's involvement was part of a process that eventually saw national gas monopoly OAO Gazprom take a controlling stake in the Sakhalin-2 project.