The United States is closely monitoring a Russian crackdown on political demonstrations. 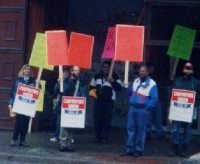 "It was clearly a peaceful protest," the spokesman, Sean McCormack said of Sunday's demonstration in St. Petersburg. "It raises a question about whether or not those opposition figures are able to freely express their opinions."

European Union officials said Monday they would press the issues of democratic freedoms and human rights with Russian officials at talks in Luxembourg next week in response to the crackdown.

The clashes between police and anti-Kremlin protesters led to the detention of more than 100 people on Sunday in St. Petersburg and around 170 at a Moscow rally on Saturday, including former world chess champion and opposition leader Garry Kasparov.

Critics say the Kremlin has tightened control over Russia's political landscape to engineer a smooth transfer of power to a hand-picked successor to Putin, who is approaching the end of his second and final term.

"In any state where you are having elections, it is imperative that all participants and everybody who has a voice in the political spectrum be able to freely express their point of view without threat of harassment or intimidation," McCormack said.