Russia could impose duties on US$6 billion of Belarusian goods

Russia is considering imposing duties on more than half of Belarusian imports in a major escalation of a dispute between the two countries that has disrupted the flow of Russian oil to Europe, the Vedomosti business daily reported Wednesday. 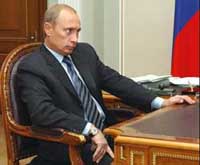 Russia could impose duties on US billion of Belarusian goods

Trade and Economic Development Ministry spokeswoman Alla Borisenkova said that she could neither deny nor confirm the report. "Such measures are theoretically possible but the ministry is not working on such steps," she told The Associated Press.

The newspaper quoted an unnamed government official as saying that from February onward, Russia could levy import duties on Belarusian goods that are worth US$6 billion (Ђ4.6 billion) annually that currently have a duty-free status under a customs union agreement.

This would include Belarusian goods 80-100 percent of which are exported to Russia, including meat and meat products, milk and dairy products, televisions and furniture.

Russian Energy and Industry Minister Viktor Khristenko on Tuesday hinted at such measures. "The trouble which we have seen concerning the transit of oil could be the reason to more thoroughly analyze the preferential regime on other commodities," he said.

The dispute was sparked by a Russian decision late last year to impose duties on oil exports to Belarus. Last week, Minsk said it would slap duties on Russian oil pumped across Belarus to Europe.

On Monday, Russia stopped pumping oil to Europe via the Druzhba or Friendship pipeline, which crosses Belarus, accusing its neighbor of siphoning off oil. By Tuesday, the stoppage had pinched supplies to Ukraine, Germany, Poland, Hungary, the Czech Republic and Slovakia.

The second Russian-related energy stoppage to affect the EU in 12 months intensified European concerns about reliance on Russian oil and gas and prompted criticism by European Union leaders.

But President Vladimir Putin appears to be determined to tough the situation out, calculating that Belarus' authoritarian leader Alexander Lukashenko will have to climb down in a matter of days when his country runs out oil reserves, analysts said, reports AP.

Taking a tough line Tuesday, Putin ordered his government to work out a set of measures aimed at Belarus to protect the national economy.

Putin also ordered his Cabinet to consider a possible reduction in oil output an indication the standoff could drag on. Russia has a limited capacity for refining oil and would have to cut crude output if its exports decrease suddenly.

Talks between Belarus and Russia broke up in failure Tuesday after Russia insisted that Minsk annul the oil transit fee.

Once-close relations between the two former Soviet nations have grown tense, and Moscow has grown impatient about subsidizing the economy of Belarus' isolated regime through cheap energy.