Russia dug in its heels over a two-day-old pipeline transit dispute with Belarus that has interrupted Russian oil shipments to Germany and much of Eastern Europe, amid mounting European Union criticism of the disruption. 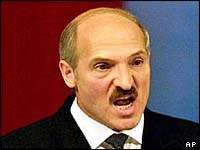 The second Russian-related energy stoppage to affect the EU in 12 months has intensified European concerns about reliance on Russian oil and gas.

But President Vladimir Putin's calculation appears to be that Belarus' authoritarian leader Alexander Lukashenko will have to climb down in a matter of days when his country runs out oil reserves, analysts said.

Putin on Tuesday ordered his Cabinet to consider a possible reduction in oil output an indication the standoff could drag on. Russia has a limited capacity for refining oil and would have to cut crude output if its exports decrease suddenly.

Once close allies, the two former Soviet nations' relations have grown increasingly tense amid impatience in Moscow at subsidizing the economy of Belarus' isolated regime through cheap energy.

The ongoing spat was sparked by a Russian decision late last year to impose duties on oil exports to Belarus. Last week, Minsk said it would slap duties on Russian oil pumped across Belarus to Europe as Lukashenko lashed out at what he called the Kremlin's "shameless" conduct, reports AP.

On Monday, Russia stopped pumping oil to Europe via the Druzhba, or Friendship, pipeline that crosses Belarus, accusing its neighbor of siphoning off oil, and by Tuesday, the stoppage had pinched supplies to Ukraine, Germany, Poland, Hungary, the Czech Republic and Slovakia.