The Russian military on Thursday successfully test-fired an intercontinental ballistic missile as part of regular efforts to check the readiness of Soviet-built missiles, a military spokesman said. 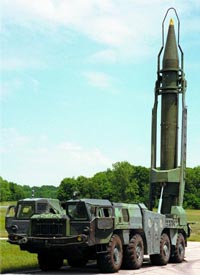 The RS-18 Stiletto missile, also known as the SS-19 in the West, blasted off from the Baikonur cosmodrome in Kazakhstan and its warhead hit a designated target on the Kura testing range on the Kamchatka Peninsula of Russia's Far East, Space Forces spokesman Alexei Kuznetsov said in a statement.

Kuznetsov said the launch was intended to "confirm the missile's technical characteristics and reliability" as part of efforts to extend the lifetime of this type of missiles, reports AP.

Russia's strategic forces have conducted regular test launches of Soviet-built ballistic missiles to check their performance. The post-Soviet funding shortage has left the military struggling to extend the lifetime of Soviet-built missiles, since the government lacks the funds to quickly replace them with new weapons.