The Russian Prosecutor General's Office said Friday it may launch a criminal case over alleged environmental violations at a giant Shell-led energy project, as officials continue to crank up the pressure at the troubled multibillion-dollar development. 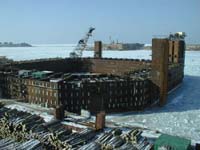 "The Prosecutor General's Office plans to inspect materials provided by the Natural Resource Ministry on ecological violations during the Sakhalin-2 project," prosecution spokesman Konstantin Nikonov told The Associated Press. "If there are sufficient grounds after this inspection a criminal case will be opened,"

After a visit to the Pacific island of Sakhalin to inspect the liquefied natural gas development, Natural Resources Minister Yuri Trutnev said Wednesday that the company had violated 5 articles of the criminal code some of which were punishable by prison terms of up to 7 years.

The troubles at the Sakhalin-2 project in the Russian Far East have been closely watched by Western governments over fears that the environmental checks, which began in August, are a smoke screen for reshaping Royal Dutch Shell PLC's original deal in the Kremlin's favor.

Analysts have suggested the Kremlin is seeking to secure better terms for state natural gas monopoly OAO Gazprom to enter the project as well as renegotiate the deal.