Russian President Vladimir Putin is visiting Africa’s Morocco for the first time during his presidency. Putin looks to expand Russia's African reach to Morocco with a visit - aimed at boosting cooperation with this country in the field of gas and electricity sources. 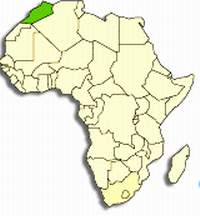 Putin was to arrive Wednesday night from South Africa, where he pushed for a greater Russian business presence. He will meet Thursday in Casablanca with Morocco's king Mohammed VI for talks and sign an accord on bilateral cooperation.

No details of the accord or other possible deals planned in Morocco have been released, but energy, defense and fighting terrorism are expected to be high on the agenda.

In 2002, the two leaders signed a declaration of strategic partnership during the king's visit to Moscow. Russia has taken a keen interest in investing in Moroccan energy and defense, including selling the North African kingdom an air defense system.

Claire Spencer, an analyst at London's Chatham House think tank, said both countries stand to gain from cooperating on energy.

Russia, whose natural gas exports are key to its now-booming economy, "is looking for markets outside Europe, and Morocco is looking to diversify away from Algerian gas," Spencer said.

Morocco is heavily dependent on importing natural gas from neighbor Algeria, with whom relations are sometimes tense, Spencer said.

Moscow was traditionally close to Algeria and other communist-friendly African states during the Soviet period. With the Russian economy thriving thanks largely to high oil prices, it appears to be reaching out to other African nations as it seeks to expand its global economic influence, the AP reports.

He departs Morocco on Thursday afternoon following lunch with the king.