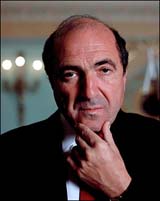 Russian Deputy Interior Minister Andrei Novikov said that Interpol's move would provide Russia with "additional arguments for nations giving shelter to those who are being sought," ITAR-Tass reported.

An official at Interpol's Paris headquarters said in a telephone interview that the agency had just ended the legal review of its so-called "red notices" related to Russia Interpol notifications to member countries that the country in question has issued an arrest warrant.

The legal review of the notices, conducted following a legal challenge, has concluded that there are no problems with them, said the Interpol official who spoke on condition of anonymity because he was not authorized to speak to the media. He said that the hold on the notices was therefore lifted.

The Interpol official would not say on what basis the Russian warrants had been challenged.

Novikov said that Russia was fully satisfied with the Interpol move. "Interpol once again has demonstrated its independence from outside political influence," Novikov said, according to the ITAR-Tass.

Berezovsky, who lives in London where he has been granted political asylum, and Nevzlin, who lives in Israel, are top Kremlin foes, and Russian authorities long have sought their extradition.

Berezovsky amassed a fortune in dubious privatization deals in the early 1990s and became an influential Kremlin insider under Russia's first president, Boris Yeltsin, but fell out of favor with his successor, Vladimir Putin. He fled for Britain in 2000 to avoid a money laundering investigation, which he said was politically motivated.

Berezovsky has a Russian passport, but he also has refugee documents from Britain under the name Platon Elenin after he formally changed his name.

Nevzlin, who fled Russia after Yukos owner Mikhail Khodorkovsky was arrested amid a crackdown widely described as a political vendetta by the Kremlin, has been a vocal critic of the Kremlin. Russian prosecutors have accused Nevzlin of being behind a double murder in 2002 and the killing of a businesswoman in 1998 the charges he denied as political, reports AP.