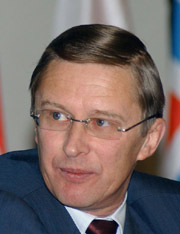 Officials have said the meeting of the ministers from the six-nation Shanghai Cooperation Organization will address regional security and the "three forces of separatism, terrorism and extremism", a catch-phrase for Islamic militancy.

The organization, which got its informal start a decade ago but was formally launched five years ago, was founded to build confidence among the member nations and grapple with militant Islamic groups.

Its mission has expanded to include economic and political issues, reports the AP.