A Briton and an American who were sentenced to deportation and a fine for illegally entering Russia after they walked across the frozen Bering Strait from Alaska filed an appeal Thursday, the Interfax news agency reported. 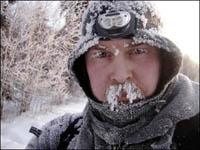 Karl Bushby, a former British paratrooper who is halfway through a journey of 58,000 kilometers (36,000 miles), and his travel companion Dmitry Kieffer, were detained in the Far East region of Chukotka on April 1 and sentenced two weeks later, the AP says.

Interfax quoted the travelers' lawyer, Alexander Perelygin, as saying that Bushby and Kieffer claimed the local court had disregarded their arguments in favor of the prosecutors' and that they had been unable to express themselves adequately through the interpreters who were provided to them to translate from English into Russian.

Yuri Ivanov, chairman of the Chukotka district court, said the appeal would be sent to the district court in the provincial capital, Anadyr, within a few days, Interfax reported.