A bear clad in the Russian tricolor dances with a panda wearing the Chinese red and yellow stars on banners around Beijing. "Together Toward Common Prosperity" reads the slogan on ads for a coming Russian cultural year. 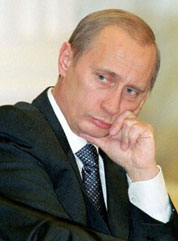 Russian President Vladimir Putin will seek to tighten his country's dance with its former Cold War adversary when he arrives in China's capital Tuesday for a two-day state visit.

With China's wealth and might burgeoning, Putin's meeting with Chinese President Hu Jintao, their fifth in under a year, is expected to be a tightly choreographed spectacle of symbolism and overtures to Russia's gigantic neighbor.

Officials in Moscow and Beijing have said spurring trade and investment are key goals of Putin's visit. But looming in the background are the two powers' tightening military and political ties, and wariness over U.S. domination of global politics.

"The positive development of our relations convincingly proves that pragmatism and constructive dialogue are far better than mutual claims and endless appeals to the disputed pages of history," Putin was quoted as saying in an interview with China's official Xinhua News Agency.

Putin is due to take part in ceremonies launching the Year of Russia in China. Banners advertising the event are hung at the Beijing airport, at hotels and on some downtown streets.

Fyodor Lukyanov, editor of the magazine Russia in Global Affairs, said the two countries are trying to increase both the quantity and the quality of their trade, Russia as a raw-materials supplier for China's exploding economy, and China as a maker of inexpensive manufactured goods.

China is a leading buyer for Russian arms and oil, and says it expects to boost imports of Russian industrial machinery. Bilateral trade totaled US$29.2 billion last year and could double by 2010 to US$60 billion.

Putin and Hu are also expected to discuss a planned pipeline to carry Siberian oil to booming East Asian markets. China and Japan have lobbied and maneuvered hard for the best routing of the 4,100-kilometer (2,550-mile) East Siberian-Pacific pipeline. China currently imports all of its Russian oil by railway tanker cars, reports the AP.