The United States, France and the United Kingdom struck the missile blow on Syria a few days before OPCW experts were going to visit Douma to investigate reports about the chemical attack,  Russian Foreign Minister Sergei Lavrov said at the annual assembly of the Council on Foreign and Defence Policy. The minister noted that Damascus did not create any obstacles for experts coming to investigate the incident in Douma. 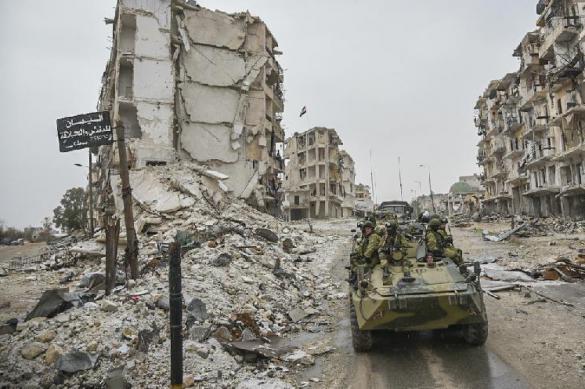 "Of course, it is clear to everyone that this happened the day before OPCW inspectors, who already arrived in Beirut, were to move to the site of the incident to find either the presence or absence of evidence of the use of chemical weapons," Lavrov said. Sergei Lavrov also said that the experts already confirmed their readiness to go to the city of Douma despite the missile attack.

Lavrov recalled that a similar situation occurred a year ago, before the USA struck Shayrat airbase in Syria. The Foreign Minister noted that Western countries did not provide convincing evidence of what had happened then either. "As you have heard, the US president, the prime minister of Great Britain, the French president said that they had irrefutable facts proving that it was Assad who used chemical substances in Douma. We heard similar statements a year ago, when doubtful videos were demonstrated as irrefutable facts. Then it was miraculously revealed that the OPCW received samples from France and the UK and that there was sarin in them," the minister said.

The idea for chemical experts from France to visit the site of the alleged attack in Douma was expressed during a telephone conversation between Vladimir Putin and Emmunuel Macron. "We agreed that there would be contacts through defence departments for the purpose, but none of our French colleagues contacted either the Russian Defence Ministry or the Foreign Affairs Ministry," Lavrov said.

What weapons does Syria have to strike back?
Author`s name: Editorial Team
syria
World
The Russian army responds to explosions of Nord Streams pipelines