Large-scale drills of the Russian Airborne forces, the Black Sea Fleet and the Aerospace Forces are being carried out in Crimea. 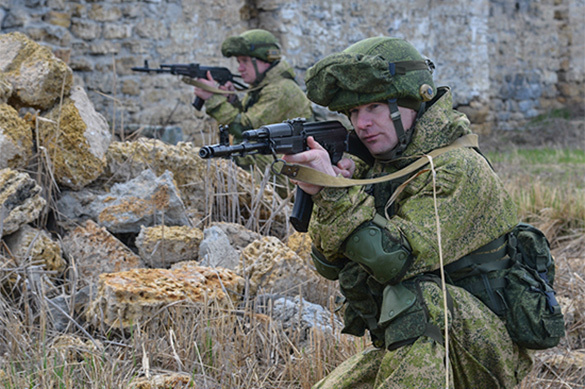 Military men from the Novorossiysk, Kamyshin and Ulan-Ude Air Assault Divisions are engaged, as well as some forces and means of the Black Sea Fleet, and the 4th Army of the Air Forces and Air Defence of the Southern Military District.

The Ukrainian General Staff has reacted in quite a hysteric way. Acts of Russia were named as illegal, they also threatened Russia with counter measures.

Igor Korotchenko, Chief Editor of the National Defence journal, has commented Pravda.Ru on the issue.

It seems, they will sober after Poroshenko's regime is changed. They will put up with new military political realia, according to which Crimea is a part of Russia. And that is for ever! For the time being clowning and Ukrainian political buffoonery will go on.

The Russian Armed Forces should not react. There are no threats after all. A dog is barking. One should react if it tries to bite, attack. Then it will be given a bash on the teeth with a boot. The dog knows it.

The Russian group in Crimea is self-sufficient, and along with the Russian Armed Forces it guarantees inviolability of the Russian frontiers.

Oleg Urbanyuk, Chairman of the Spetsnaz-Rus Association of the Special Forces Veterans and Participants of Combat Acts, has told Pravda.Ru which counter measure Ukraine may provide.

These are power and water cutoff. They have demonstrated their attitude to their citizens several times. And these counter measures are ridiculous. Let them see which exercises are carried out throughout the world. They are striving to join NATO though. And NATO conducts drills all over the world. And we have right to check combat readiness of our Armed Forces in our territory.