The Defence Ministry reported, that the Russian army in Syria had started actively applying pickup trucks with machine guns, which is an ideal weapon for manoeuvering war in the Middle East. The case is about UAZ Patriot (UAZ-3163) SUV with the Kord heavy machine gun and AGS-17 automatic grenade launcher. 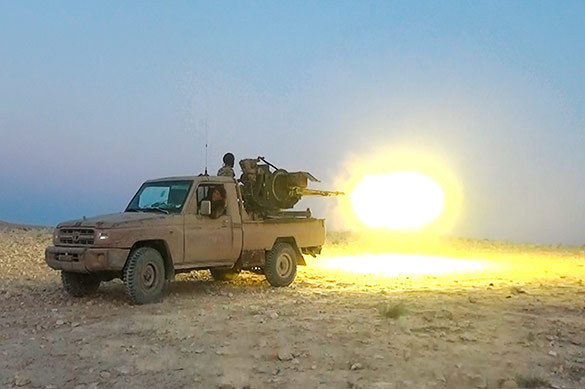 The Patriots have been deployed in Syria at the end of summer, they are involved in escorting humanitarian convoys, patrolling facilities, and serve as mobile roadblocks. Pickup trucks have been also upgraded to operate under severe conditions of a desert.

'A new system of air filtration and complex electronic equipment protection have also been installed, which are capable of withstanding great amount of dust. A more powerful climate control has been built up for comfortable work of the crew and electronic systems. It will be able to operate under sudden drop of temperature from +50 to -10. Mounts for two assault rifles and entrenching tool have been built-up between seats, as well as additional sockets to apply night vision devices,' a source in the Defence Ministry revealed.

Pickup trucks may be promptly deployed in due place, carry out strikes and retreat before a retaliatory one.

As Pravda.Ru reported, according to the Pentagon official data only, the US handed over some thousands of Toyota HiLux pickups and LandRover Defenders to the 'moderate opposition'. The popularity of armed SUVs and pickups in the Middle Eastern region has produced a special term Jihadmobile.